South Australia was founded in 1834 to uphold the ideals of religious tolerance and personal freedom. The first colonists came to Adelaide expecting to make a living with business, pastoral investments, and agriculture, but their eyes soon turned to South Australia's rich natural resources. Lead was discovered in 1838 near Adelaide, and a copper mine was founded in 1842. Adelaide soon had carts full of rich copper ore trundling down its streets to be shipped off around the world. South Australia's wealth of minerals spurred Australians all over the continent to explore for natural resources.

“The Directors of the South Australian Mining Association are open to offers for the purchase, by private contract, of lands containing minerals; and are also prepared to give a premium for information offered them as to localities where minerals can be found.” 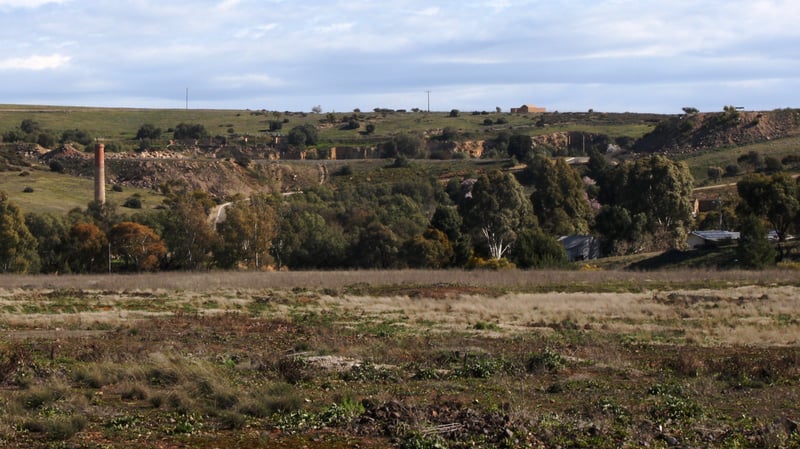 Though they received several replies, no real leads appeared. A month later, a young shepherd named William Streair showed several pieces of rich copper ore to the secretary of the S.A.M.A., Henry Ayres.

Ayers called a special meeting of S.A.M.A. Streair revealed he had found the copper pieces at two locations: one on the Gawler Plains, the other located about 145km north of Adelaide. The gentlemen were uninterested in visiting the distant site. S.A.M.A. paid Streair £3 for the information and promised further payment if they decided to buy the land.

William Streair wasn’t bothered by the Mining Association’s disinterest. He visited several shop owners on Rundle Street the next morning, and later walked out of James Bunce's store £8 richer. Streair had sold the location of the Northern mine to James Bunce. This mine turned out later to be not worth this investment, but Streair may have shared his story with a neighbouring shepherd. This man, James Pickett, later showed Bunce and his co-investor Samuel Stocks the location of the future Burra Burra Mine.

Bunce and Stocks returned to Adelaide convinced of the richness of this area. They immediately tried to get a Special Survey of the area.

The news of the rich copper deposits near Burra Creek soon spread around Adelaide. Local businessmen soon began jockeying for ownership and divided into three groups. The “Snobs” included the local shopkeepers like Bunce, Stocks, and a shopkeeper named Graham. The "Nobs" were rich men in the area, including the man who owned the Kapunda copper mine. Lastly, the South Australian Company joined the contest.

The Snobs soon joined up with S.A.M.A. to raise enough funds to order the survey. Grouping their assets was a good idea, but S.A.M.A.'s bank balance at the time stood a bit below £2,000.

The three groups decided to join forces to order the survey. The three groups started negotiating with one another, with the idea that they would divide Streair and Pickett Lodes at a later point. The Snobs, when they tallied their contributions, came up £800 short. With the Snobs unable to pay their share, the Nobs and the Company joined together.

On 9 August 1845, the Nobs and the Company brought £10,000 each to the Colonial Treasurer. The South Australian Company tried to pay with a cheque, but it wasn't endorsed by the Bank of South Australia. The Colonial Treasurer refused the payment. The Company explained that the Bank was waiting on a ship carrying enough money to cover the cheque, but the Treasurer was firm in his refusal: the Colony would not accept this payment.

To hurry the Special Survey process along, Governor Grey announced he would auction off the land. The South Australia Company was forced to bow out, unable to pay for their share. The Nobs and the Snobs to joined forces and put in their bids together. The Snobs and Nobs, however, could not agree on how to share whatever minerals were unearthed. They decided to divide the two halves of the 20,000 acres into a northern and southern section by drawing lots.

The Snobs' Burra Burra Mine soon proved its worth, helping catapult Australia into becoming the largest copper producer in the world. By 1851, the area known as The Burra was the seventh-most populated area on the continent, with a population of 5,000, and people all over Australia were searching for lodes as part of the 'Coppermania' craze.

1 The first S.A.M.A. failed after its attempt to mine the Wheal Gawler, located near Mt Lofty.